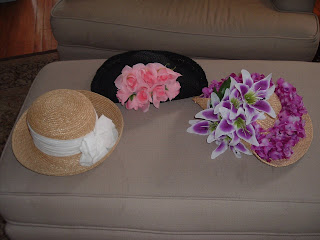 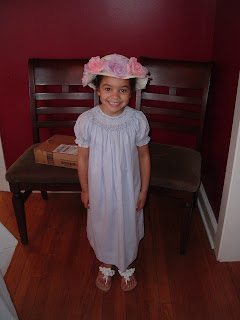 As I mentioned in my last post, we were spending most of our day at our friends' house for their Kentucky Derby party/bbq.
Well, the weather was questionable but we had a blast!  Every woman and  each little girl made and wore their own "Derby Hat".  Basically we went to a store and bought plain straw hats and decorated them with big silk flowers!  They turned out wonderfully! I took a picture of my friend's daughter Kate wearing her creation!!  So cute!  Each of us picked a horse and bet a $1.00 (my horse didn't win, figures!), two people won!  Also when we arrived there was a table just filled with "traditional  Kentucky Derby food" right down to the Mint Juleps.
The big adventure for everyone was trying the "Mint Juleps" no one had ever had one!  Boy were they strong ( I can see why they're a once a year thing)!  One sip and "Woo Hoo!!!
Also, watching my husband play Wiffle Ball with the kids in the backyard after he had drank one of those super strong Mint Juleps was quite hilarious!  He wasn't drunk, but even with a little buzz he was something to see trying to run the bases or tag a running child! lol! 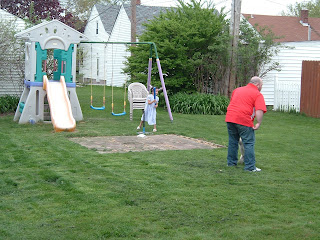 I've only been to a couple derby parties and I love them! Hate the Mint Juleps tho, I don't see how anyone drinks them. I'll stick with my wine, thanks. Where is a picture of you in your hat?

thanks for stopping by my site and commenting.

Visits from my friends

Jill C.
I was born and raised in California, and moved to Ohio (a whole different planet!) in 2000. I'm just an average California girl, and even after 9 years, I'm still trying to adjust to married life in the midwest. You can take the girl out of California but you can't take California out the girl! I still walk around my house barefoot all year around, and wear my sunglasses outside no matter what the weather is like.

Blogs I Love! Check Them Out!

My Randon Acts Of Kindness Fund